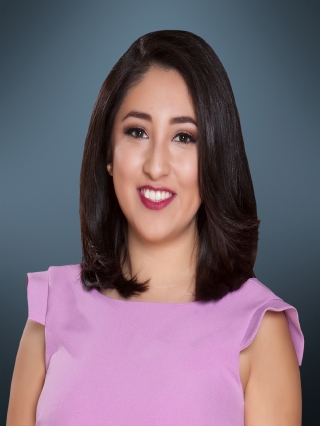 Born and raised in the borderland, it’s a dream come true for Adriana Candelaria to serve her community as an anchor and reporter for CBS4.

Adriana graduated from Socorro High School in 2010. She was a part of the yearbook team, where she fell in love with photojournalism.

She always knew she wanted to serve her community by capturing significant and historical events through her lens. In order to do this, she wanted to get an education first.

In 2014, Adriana became a first-generation college graduate with her Bachelor’s of Science in Mass Communication- Electronic Media and a minor in Spanish from Texas State University in San Marcos.

During her time as an undergraduate, she worked as a photographer for the university newspaper. Her photography was recognized for highlighting student life and was displayed at the university’s student center.

She was introduced to the thrill of live TV in 2014 during an internship with KABB- Fox 29 in San Antonio. Her favorite part of the internship was helping the production team assemble live shows at the San Antonio Riverwalk.

With the desire to become an on-air reporter, Adriana moved in 2015 to the Rio Grande Valley in South Texas. She joined the NBC affiliate.

During her time in the RGV, Adriana reported about children born in the U.S. and denied birth certificates by the State of Texas due to the parent’s lack of citizenship status and documentation.

She also covered dozens of stories about an immigration crisis in the Rio Grande Valley of thousands of Central Americans asking for asylum in the United States. The Rio Grande Valley was the busiest sector for illegal crossings and cross-border drug trafficking during her time in South Texas.

Upon her one-year anniversary with the station, Adriana was promoted to primetime anchor. She anchored several historical events, including the 2016 Presidential Election with her local station.

Adriana is glad her trajectory through Texas brought her back to where her heart has always been— El Paso! She made a promise to serve her community when she began her journalism journey. She wants to seek the truth in the borderland and help your voice be heard. Send her an email at acandelaria@sbgtv.com!