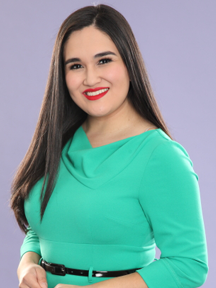 Amanda Guillen is the morning news anchor for CBS4 Mornings and CBS4 at Noon.

Prior to working at CBS4, she worked for the NBC affiliate here in El Paso. Along with her experience as a forecaster, anchor, reporter and producer along the U.S./Mexico border, she has also reported from the White House, Supreme Court and Capitol Hill as a reporter with the Scripps Howard Foundation Wire in Washington, D.C.

Some notable stories that she has covered include former President Barack Obama’s repeal of the No Child Left Behind Act, Pope Francis’ trip to the U.S. Capitol and Juarez, the Supreme Court hearing of the "one-person-one-vote principle," the 20th anniversary of the Million Man March and Bernie Sanders’ campaign visit to New Mexico.

Amanda is a proud El Pasoan. She graduated from El Paso High School and earned her degree in multimedia journalism from the University of Texas at El Paso.

While at UTEP, she was involved in many organizations. She served as a 2014 Sun Princess with the Sun Bowl Association. She was a member of Alpha Lambda Delta Honor Society, The National Association of Hispanic Journalists, Borderzine and UTEP Student Publications. Amanda was also named editor-in-chief of UTEP’s student newspaper, The Prospector, during UTEP’s centennial year. This involved coordinating and releasing the university’s first-ever 100-page special issue of the newspaper. Along with being editor-in-chief, she also started the organization's first weekly broadcast, called "The Prospector News Weekly."

Amanda loves giving back to her community and has volunteered with Project Move, Operation Hope and with EPISD as part of their Volunteers in Public Schools program.

Amanda is married to her college sweetheart and is a Mother to a baby boy, two of the most important roles of her life.

She is excited to still be living in the Sun City doing what she loves in this beautiful place that she calls home.

Have a story idea? Amanda would love to hear about it. Email her at arguillen@kfoxtv.com.