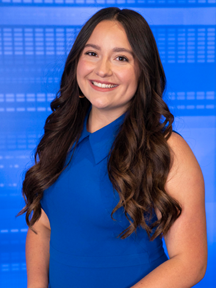 Ariana Parra was born and raised in Las Cruces, New Mexico and is well-rounded with the Borderland.

Throughout her time at NMSU, she wrote for The RoundUp newspaper as a staff writer and eventually a feature writer.

Ariana was also an active member of her sorority, Zeta Tau Alpha, where she held many roles leading to President of the Beta Nu Chapter during her final year.

In her free time, Ariana enjoys reading, listening to music and spending quality time with family.

Her favorite concert she has been to thus far is Harry Styles.

Ariana is excited to join the team as the morning news reporter.

She can’t wait to serve this community, which she has grown up in and is proud to call home.

If you have any story ideas that you’d like Ariana to share with the community, you can reach her at adparra@kfoxtv.com