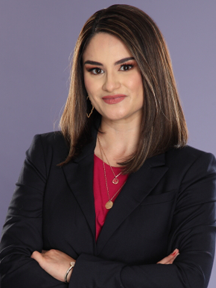 Estefania Seyffert is an investigative reporter for KFOX14 and CBS4.

Prior to that, she was the executive producer for the morning shows, overseeing KFOX14 Morning News, CBS4 This Morning, and CBS4 at Noon.

She was raised in both El Paso and Ciudad Juarez and attended Loretto Academy, where she was the news editor for her high school newspaper "The Prax."

After graduating high school, Estefania began working as a production assistant at the NBC affiliate in El Paso.

She earned a bachelor’s degree in Multimedia Journalism from The University of Texas at El Paso and was hired shortly after college as the station’s web and social media content producer.

During her time as a reporter, she earned an EMMA for her reports on various Borderland stories.

She worked as the weekend anchor and producer before returning to weekdays where she produced prime-time shows, half-hour specials, and anchored the 6:30 p.m. newscasts.

Estefania is proficient in both English and Spanish.

She is passionate about giving her community a voice and feels honored to continue telling the stories of her hometown.

If you have a story idea, you can email Estefania at eyseyffert@sbgtv.com.