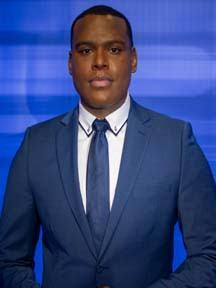 Jonathan Mejía is excited to have joined the team as a multimedia journalist in January 2022.

A Boston native, whose parents are from Honduras, Mejía started his career in the media industry in 2018 while still in college as a producer and on the assignment desk for CNBC.

He previously worked as a writer for WHDH 7 News Boston.

Prior to joining KFOX14, Mejía was an associate producer for Univision, where he worked for network shows “Al Punto con Jorge Ramos,” “Despierta América” and Edición Digital.

He resigned from his job at Univision in July 2021 to film a documentary in Mexico and Central America.

In his free time Jonathan enjoys traveling, photography, and reading.

Journalism gives Jonathan the authority to question those in power and hold them accountable and be the voice for the voiceless.

He's here to work for the Borderland community and tell their stories.