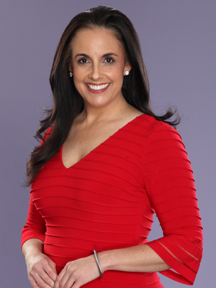 As a native South Floridian, Kira's fascination with weather began at an early age, as thunderstorms were a daily occurrence in the summertime. It was after Category 5 Hurricane Andrew made landfall, just south of her hometown, that she acquired her interest in meteorology.

Kira is a graduate of Florida State University and Mississippi State University where she studied both meteorology and geography. Upon graduating, Kira became an intern and weather producer at her local CBS affiliate during the most active Atlantic hurricane season on record.

Kira traded the land of hurricanes for forecasting in the southern tip of tornado alley when she joined the CBS affiliate KTAB-TV in Abilene, Texas, as the weekday morning and noon meteorologist. It was out in the Lone Star State where she covered tornadoes, windstorms, ice and snow.

She then returned to her home state to work for NBC 2 in Fort Myers as the weekend meteorologist.

Kira called Little Rock, Arkansas, home for two years where she worked at the NBC affiliate KARK as the weekend meteorologist and morning live feature reporter.

Most recently, Kira was the weekday morning meteorologist at KOLD in Tucson, Arizona.

When she's not forecasting the weather, Kira enjoys cooking Italian cuisine, traveling, spending time with family and friends, and cheering on her beloved Seminoles.