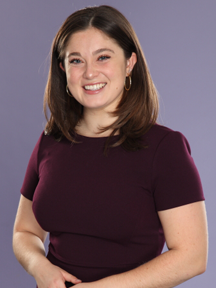 Lianna Golden is excited to be a part of the KFOX14 and CBS4 team as a multimedia journalist.

Golden is originally from the east coast.

She was born and raised on Long Island, New York, which is where her family still lives.

She lived in Philadelphia, Pennsylvania for four years while attending Temple University.

That's where she got her BA in broadcast journalism and Spanish.

During her time at Temple, Golden was a lead reporter and anchor for her university's live newscast, Temple Update.

Golden wouldn't be where she is today without the training and lessons learned during her undergraduate years.

During her free time in the Borderland, Golden loves to go running, hiking, swimming, and outdoor activity.

Back at home in NY, Golden can be found reading a book on Long Island's best beaches, which is one of her favorite places to be.

She also loves spending quality time with her family and puppy who are nearly 2,000 miles away.

Golden is ecstatic to be a journalist with this team and to tell this community's stories.

Never hesitate to reach out to her with a story idea or just to say hi.