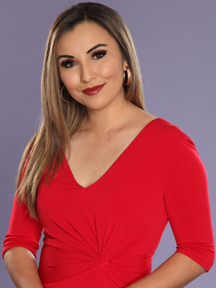 Salina Madrid has been around the Borderland her whole life, but calls Las Cruces, N.M., home ... where she was born and raised.

She joins CBS4 Mornings as an anchor and CBS4 at 12 p.m. as a reporter.

Salina is a proud Aggie and graduated from New Mexico State University in May 2018, with a bachelor's degree in Journalism and Mass Communications and a minor in Government. GO AGGIES!

During her time at NMSU she anchored and reported for KRWG-TV News22, a student-produced newscast awarded for excellence in broadcasting by the New Mexico Broadcasters Association.

Salina was also the Cultural Editor for the student newspaper, The Round Up, where she wrote and reported on stories happening around campus.

She also interned in Charleston, S.C., at WCIV ABC News 4.

Throughout her college career, she was a proud member of Zeta Tau Alpha, where she was president, among other roles. She continues to be active as an alumna member of ZTA.

Salina’s love for news started at a young age in elementary school, when she would watch the news and read the newspaper with her grandfather every morning. She said those mornings with him made this her passion.

When Salina isn’t telling stories, she enjoys spending time with friends and family, reading, going to the gym and trying out different restaurants!

If you have a story idea for El Paso or New Mexico, or just want to say hello, you can always contact Salina at smmadrid@sbgtv.com, or through Facebook or Twitter.